August 24, 2019
I keep telling myself I should write more, but then I just end up reading other people's blogs and deciding I've got little to add…

Anyway, now that my friend has left after the post-con visit, my con is truly over. I had a great time. I met new people, reconnected with those I already knew, distributed my share of bearhugs, did some panels, attended much too few, and cried at the Hugos.

I would have wanted to attend more panels, but time was limited and I didn't want to spend it standing in lines. Also, I made a decision to prioritise meeting people over going to panels, because as great as they can be, it is 1) hit and miss, even with the best participants, and 2) I can usually access the information/discussion in some form online or in a podcast and getting IRL time with friends is not something that can be as easily replaced. That's also the reason why I spent more time with people from outside the UK, whom I'm not likely to meet for at least two years (assuming I make it to DC -- New Zealand is surely not going to happen).

I arrived on Wednesday and got to have dinner with dear friend M.E. Garber (another friendship that started online). Mary was also kind enough to have picked up my registration packet, saving me standing in the line on Thursday morning, when the registration line snaked out of the building.

On Thursday I had lunch with

On Friday I had an early lunch with Kelly Smith, founder of the Society for Social & Conceptual Issues in Astrobiology (SSoCIA), and a bunch of writers interested in the subject. We talked about the ethics of "contact" and space exploration, and how these are tackled in fiction (is it ethical to send probes to planets/moons where life may be evolving? Should we settle on planets with existing primitive (microbial) life? etc.) 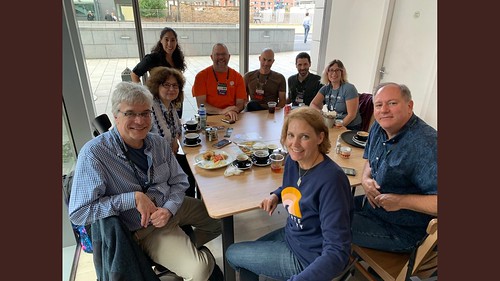 Afterwards, I headed to the fountain pen meet up, which was fun, even though my new order of PenBBS failed to arrive on time. (I got them now, though, and they are so pretty!): 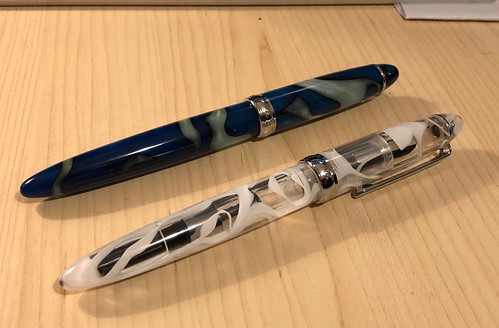 I got a major case of pen envy later, though, after a glimpse of some of YHL's pens… So beautiful… So shiny… Alas, no pictures, and good, because I'd just salivate more. :D

I had both of my panels on Friday, too. Both went well, I think, at least without any issues. Here's me looking all serious and then relieved after the "Why we love our droids" panel: 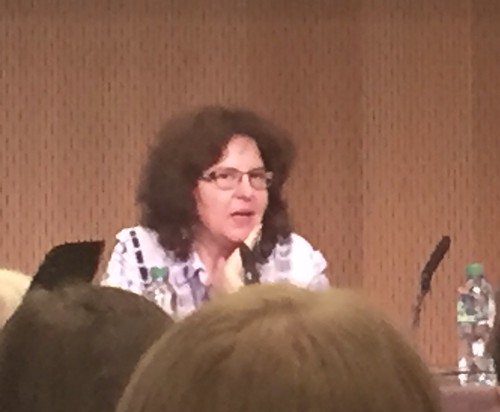 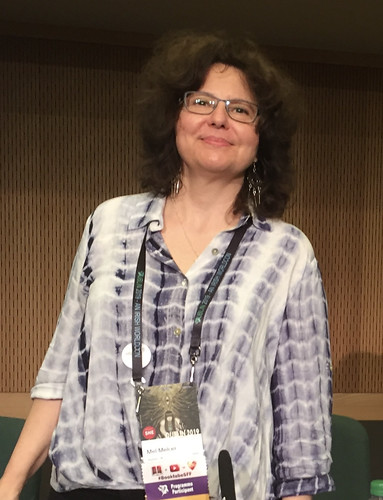 Saturday was the "business" day. I started late (no surprise here) with a reunion of Taos Toolbox graduates with Nancy Kress and Walter Jon Williams.  Nancy had to leave for her reading, but here's the photo of the three from our year (Adam Jackson, Mary Garber, WJW, and me): 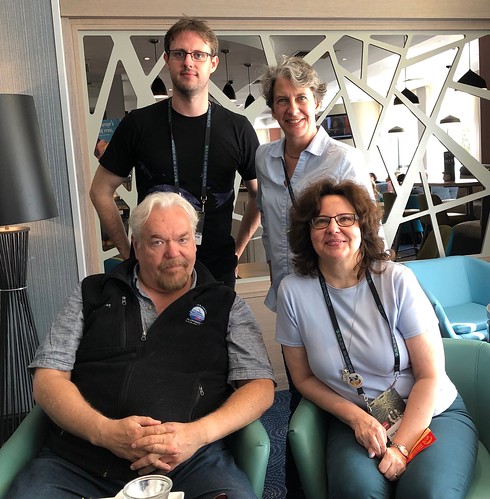 From there I headed to the Locus Solon on the Cill Airne boat (ship?). This was lovely, as I got to catch up with a lot of people from Codex, as well as Arley and other Locus folk. Here's a part of the Codex contingent: 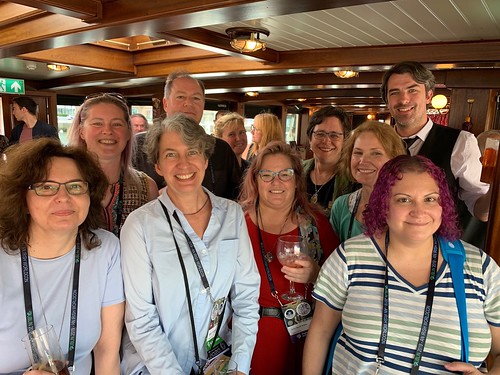 Afterwards, I met Joshua Bilmes, the head of my new agency (JABberwocky). My agent wasn't there, and Joshua is very much involved in all of the agency, so he wanted to meet me for a chat. I asked him about the history of the agency, and what made him start one on his own. It was an interesting discussion, and I'm glad I got to know him better.

Later was my first "agency dinner." I was a bit nervous, as I think I'm the newest client, having only signed up in May. It didn't help that I sat next to a Big Name Author, who didn't even look at me or introduce himself. Luckily, other people there were lovely. I especially appreciated Marie Brennan 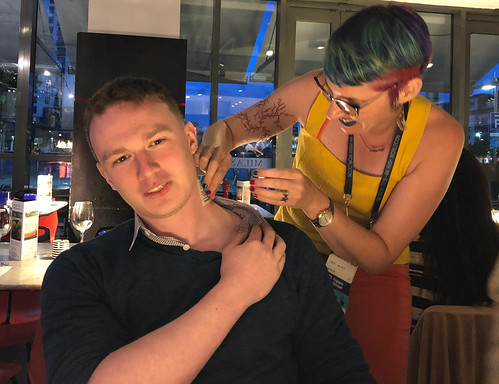 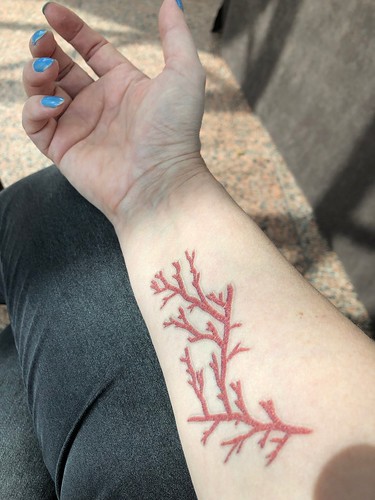 I slept badly that night and rolled out of bed late at 1:00 pm on Sunday. I got to meet another DW friend

I planned to change for the Hugos, but didn't have the time. Not that it mattered, as I wasn't part of anything official. The ceremony was great, with ups and downs that everybody has already written about. The winners were all worthy (at least the ones whose work I know, can't speak for the others), even though I was disappointed that Machineries of Empire didn't get the Hugo the series totally deserved. Still, it's hard to be upset when the winner is the lovely Becky Chambers. Mary Robinette's speech made me cry -- because Mary Robinette, because a real lady astronaut, and because she dedicated it to Mercury 13, about whom I read a lot recently.

I ended the night in the Spencer bar, which was the bar-con, and celebrated with waaaay too many flower myths (a delicious cocktail). I figured I was in trouble when my friends started to arrange to make sure I got back to my hotel… I ensured them I'd make it there by myself, and I did. Oh, the little victories…

Mary Garber and I got home to my place late on Monday night. It was lovely to de-con-press together. On Tuesday we managed to get as far as the grocery store, which was already an achievement. On Wednesday we set off to an event in the city but never got there. We went to the British Museum, and it was, as usual, amazing. Since it was Mary's first time, we started with "the greatest hits": the Rosetta stone, the Assyrians and the Egyptians. We then continued to the jade exhibition, which wasn't as rich, but still amazing, followed by the south Asian section. We reached the tiny Korean room just when they decided to kick us out. Next time! 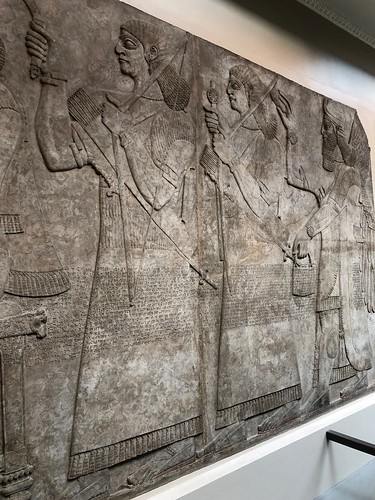 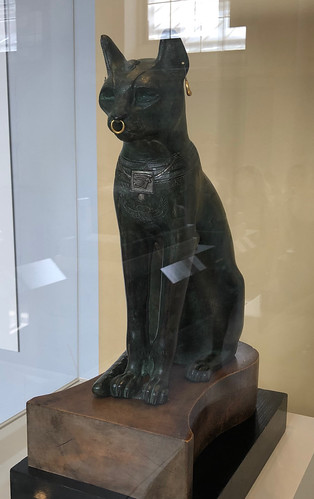 Unfortunately, due to the slowest service in the world in the restaurant we stopped in for lunch/dinner, we ended up missing the event we were planning to see (Charlie Jane Anders and Anallee Newitz in conversation). Also, after the hours at the museum, and me still fighting with con-crud, we were both falling asleep already.

Mary left on Friday morning, leaving me to get back to reality. The novel revision is due to the agent, math exam is only three weeks away… It's time to resume standard operations.

It's been a great week. To everyone I met: thank you for your company. Hope your con was as good as mine. See you in DC!

Popular posts from this blog

August 10, 2019
From C3PO to Murderbot: why we love our droids Format: Panel 16 Aug 2019, Friday 17:00 - 17:50, Wicklow Hall 2B (CCD) From robots to sentient drones to cyborgs, our not-quite-human creations continue to fascinate, inspire, and break our hearts. As different as Star Trek’s Data is from Iain M. Banks’s minds, we cannot help but see ourselves in those larger-than-life creations. The panel will discuss the reasons why and how the machine-people serve as a mirror cabinet to humanity. M V Melcer, Mika Koverola, William Ledbetter, Karina Steffens (M) From concept to the screen Format: Panel 16 Aug 2019, Friday 20:00 - 20:50, Wicklow Hall-1 (CCD) What are the unique challenges of creating art for film-makers? From static ideas on a flat surface to 3D in real life, and then back to two dimensions on the big screen, what surprises have these artists encountered? Gregory Norman Bossert, M V Melcer, Charles Vess (Green Man Press), Norman Cates (Weta Digital / CoNZealand) (M)
Read more

January 01, 2019
2018 was an odd year for me. It started well, with high hopes for the novel that went on submission at the end of 2017--but as months went by, I lost hope. I got busy outlining a new project. This one proved difficult to get started. I tried two openings, searching for the right protagonist and the right voice, until I finally found it on the third try. Once I found the voice, the novel started taking shape. I was still painfully slow, but eventually I had a zero draft, and then the first, rough edit out to alpha-readers at the end of November. I'm still waiting for most of them to come back to me, but the early indications are that it's not going to be a total disaster… So that took most of my writing year. It must seem ridiculous to those who can knock out a novel in a month but I'm not that lucky/gifted. I'll take what I can get! Another development this year--not really writing-related, or only at a very long stretch--is that I decided to scra
Read more

This is not a blog. It's a running commentary on things random, most of which refer to my writing.

Don't expect it to make sense.